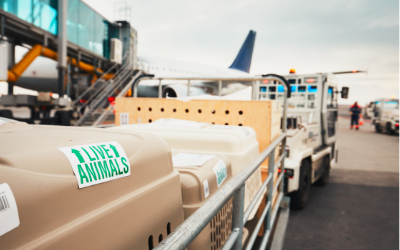 Research has shown the benefits of having pets in our lives – dogs can have physical, mental, emotional, and social benefits. Pet owners tend to feel less lonely and have lower rates of depression. And having a dog can lead to increased levels of physical activity, along with improved heart health, and lower cholesterol and blood pressure. Growing up with a dog may help strengthen children’s immune systems and may reduce the risk of allergies in children. At the end of a long day—or to keep you company while you work from home—having a furry face and wagging tail can improve your mood and help you to relax after a tough day!

Adopting a rescue can be a great way to add a companion animal to your life. But this requires research to ensure that you are adopting a healthy and disease-free rescue dog. Dogs imported from different countries around the globe can run the risk of bringing “hitchhikers”—exotic parasites, bacteria, and viruses rarely seen in North America which pose a health risk to the populations local pets, wildlife, and people.

Leishmaniasis, a serious disease caused by a protozoan parasite transmitted by a small sand fly, is found in parts of the tropics, subtropics, and the Mediterranean (e.g., Mexico, Costa Rica, Belize, Brazil, Iraq, Israel, Spain, Egypt, Morocco). Leishmaniasis can affect the skin, mucous membranes, and internal organs. While leishmaniasis is not commonly found naturally in North America, the incidence of the disease in dogs imported to North America is concerning. The infection is difficult to clear, meaning that while an episode can be treated, an infected dog can continue to have episodes of illness throughout its life. Additionally, an infected dog can remain a reservoir for infection to other dogs and people. The prognosis for pets diagnosed with leishmaniasis affecting the internal organs is guarded to grave, with many dogs dying from kidney failure. Currently the northern regions of North America don’t have insects that can spread the disease, but with climate change, this could also change.

Brucellosis is caused by bacteria that infects the reproductive organs in dogs, and occasionally the bacteria infects the intervertebral discs, eyes, kidneys, or brain. If the bacteria are transmitted to humans, it can cause infection (ranging from mild flu-like symptoms to serious cardiac or neurological problems) and miscarriage. Children are particularly susceptible to infection and severe disease. Brucellosis can also be transmitted to livestock (e.g., sheep, cattle, goats) and wildlife (bison, elk, wild pigs). As with leishmaniasis, treatment for brucellosis in dogs can control the infection, but no treatment completely eliminates the bacteria. The dog may shed bacteria for the rest of its life. Neutering or spaying an infected dog helps to decrease shedding of the organism into the environment, reducing the risk of spread. Strict hygiene measures must be taken with any dog that tests positive for brucellosis.

The parasitic tapeworm Echinococcus is found primarily in Africa, Europe, Asia, the Middle east and Central and South America. It’s also been found in certain areas of North America in coyote and fox populations and is thought to have its origin from imported domestic dogs. Echinococcus can be transmitted to humans via an infected animals’ feces. In humans, large cysts can form within the liver and lungs making echinococcosis one of the most serious zoonotic diseases. Diagnosis of echinococcosis in dogs can be difficult as most infected dogs do not show any signs of illness and laboratory diagnosis requires specialized testing. However, because the parasite typically only remains in the gastrointestinal tract of infected dogs, treatment is with the same dewormer used to treat other tapeworm species, highlighting the importance of deworming pets.

Canine heartworm disease is another disease, that while prevalent in certain areas of North America, in other areas it’s uncommon/does not occur. It’s important to be aware that a rescue dog coming from an area of high heartworm incidence could be infected with heartworm disease and may require specialized, expensive, and risky treatment. Additionally, bringing a heartworm positive dog into an area where there are few heartworm cases and few dogs are on heartworm preventives also brings the risk that the “environment” becomes contaminated and heartworm disease becomes a bigger problem in the area.

Distemper and rabies are diseases that many people have heard of and while these diseases are not common in most dog populations in North America, they are still common diseases in many areas of the world. Ensuring that the dog you rescue has been appropriately vaccinated for these diseases (and others, such as parvovirus) is extremely important.

Helping vulnerable dogs is a natural human response. Not having clear information about the background of an imported rescue dog or the potential illnesses it could have can lead to a heartbreaking situation if the dog is ill and your veterinarian has not been informed of your pet’s history.  Before you decide to adopt an imported rescue, be sure to discuss your plans with your veterinarian. Not only can your veterinarian advise you on the risks and inform you of the questions you should ask the rescue organization, but working with your veterinarian before the adoption, also allows him or her to research the types of diseases your rescue dog could have (depending on the country of origin) and what care the dog may need (testing, treatment) once the adoption is complete.

Note: This article, written by LifeLearn Animal Health (LifeLearn Inc.) is licensed to this practice for the personal use of our clients. Any copying, printing or further distribution is prohibited without the express written permission of Lifelearn. Please note that the news information presented here is NOT a substitute for a proper consultation and/or clinical examination of your pet by a veterinarian.